Salazar: All should fight for water, land

Former secretary of the interior sees conservation as a way to close physical, social, political divides

Throughout his career in Colorado state government, the U.S. Senate and as secretary of the interior, Ken Salazar has focused on the natural environment and the people who rely on it.

His motto was “Fighting for Colorado’s Land, Water and People” during his successful campaigns for state attorney general and the Senate. The motto took on broader significance when former President Barack Obama chose him to lead the Interior Department.

“That’s always been at the heart of who I am, understanding the importance of rivers, water, land, open space and wildlife,” said Salazar, whose family’s roots are deep in Colorado’s San Luis Valley and northern New Mexico.

Salazar, now a partner with the international law firm WilmerHale, was intent on keeping his focus on conservation. Two years ago, he cofounded the Salazar Center for North American Conservation.

It is his hope that with the country more polarized than ever, Americans can find common ground on the most pressing environmental problems — climate change, land use, water quality and quantity — and that the center can bring together diverse ideas and people.

“I think the area of conservation, how we protect our lands, our air and our water, can be a great unifier for a very divided world and a very divided nation,” said Salazar.

Conservation projects, which often have support from city dwellers, can create economic opportunities in rural areas. Salazar mentioned the establishment of the Great Sand Dunes National Park, which has significantly boosted tourism in the San Luis Valley.

With the center, Salazar said he wanted to create a clearinghouse for some of the best conservation policies and practices. He and Tony Frank, chancellor of the Colorado State University System, founded the center, which will be housed at the CSU Spur complex being built at the National Western Center in Denver.

Salazar and Frank, the center’s co-chairmen, said the program is as much about bridging divides between people and urban and rural communities as it is about ensuring that landscapes are connected so wildlife can migrate and rivers can flow where they need to go.

Frank said it was clear that Salazar wants the center to work across barriers and borders. “Not just geographic borders, but bureaucratic, the interface between government and (nongovernment organizations), academia and all these different groups.”

Salazar said he wanted to locate the center at CSU because the school is recognized across the country and the world for its work on conservation.

He contributed money left from his Senate campaign to establish the center as well as to programs at Colorado College and Adams State University.

Putting ideas and research to work on the ground, as envisioned by the center, fits with the university’s mission as a land-grant institution, Frank said.

In the late 1800s, the schools received federally controlled land to provide agriculture, science and engineering education and to work with communities. 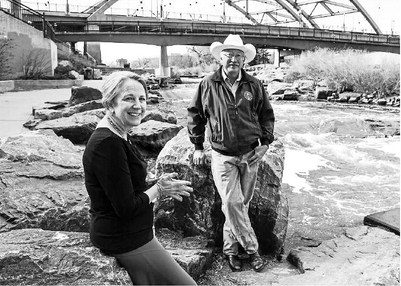 “Whenever we can take what our faculty members are doing and apply it to make things better for Colorado today, I think that absolutely furthers our mission,” Frank said.

The center also is working beyond Colorado’s borders, with people in Mexico and Canada.

As part of its second annual symposium, the Salazar Center in September awarded a $100,000 prize to the Borderlands Restoration Network, which works to restore and improve habitat for bats that feed on and pollinate wild agave plants on the Arizona-Mexico border.

The network is developing a certificate of sustainability for producers of bacanora, a liquor made from agave, to encourage conservation.

“Last year, we offered the Connectivity Challenge. It was to really ask folks from around the continent to bring their best ideas to us about how to scale innovations in landscape conservation,” said Beth Conover, the center’s executive director. “We ended up with 46 really remarkable proposals.”

Conover, formerly with the Gates Family Foundation, said the center is concentrating on both big landscapes and urban areas. She developed the Greenprint Denver sustainability office.

The center has an agreement with Denver to help with the city’s work on climate change. Conover said green spaces and trees can help lessen the effects of climate change. Access to the outdoors and nature is also good for people’s health.

And the connections can be made between city life and healthy waters and public lands, Conover said.

“How do you help people who live in cities see the relevance of conservation issues to their lives? Cities are where most of the people live and a lot of the bigpicture questions about public lands and policies about natural resources seem remote,” Conover said. ” But you can draw the connection between the smoke you’re breathing from the wildfires and the water quality from the watershed upstream. There are a lot of connections there.” Judith Kohler: jkohler@denverpost.com or @JudithKohler

Click here to see this page in the eEdition: